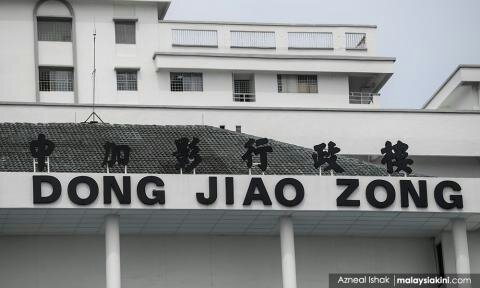 This is a violation of constitutional rights.

Why wasn’t the Malay Dignity Congress called off on the grounds of public security?

Why was the Herald, the Catholic weekly, banned from using the term Allah in Malay print on the grounds of public security?

Dong Jiao Zong should do something about Jawi/Khatt instead of chewing on their balls.

Malay NGOs have no locus standi, no legitimate expectations, on the legitimate interests, legitimate aspirations of non-Malays.

They can’t insist that vernacular schools must accept Jawi script for Bahasa Melayu/khatt.

Sanskrit and Latin are languages used in Hindu temples and Christian churches.

Jawi is a script which was replaced by Roman letters.

Khat is a drug.

Utusan Melayu, in Jawi, was shut down years ago.

Jawi is a dead script.

Dong Jiao Zong’s congress regarding Jawi education may be nixed, but a separate event by different organisers on the same issue will be proceeding on Sunday.

The congress by the Seni Khat Action Team (Sekat) will be held at the Crystal Crown Hotel in Petaling Jaya on Sunday morning.

Sekat secretary Arun Doraisamy said police had already been informed of the matter, and they are also hoping that Education Minister Maszlee Malik will attend.

“I urge Maszlee to take this opportunity to show up in good faith for the sake of unity to resolve this issue and listen to the rakyat,” he said in a statement tonight.

Sekat wants the government to review its decision to introduce Jawi in the Bahasa Malaysia syllabus at Chinese and Indian vernacular schools.

This is will appear in three pages of the Year 4 Bahasa Malaysia textbooks for 2020.

At present, the Education Ministry’s policy is that this section is optional for vernacular schools, subject to approval from parents and parent-teacher associations.

Languages can emerge if the people have choices and are left alone to communicate as best as they can.

Slide pages from right to left.